Inductance - self and mutual

The law of inertia states a body at rest wants to remain at rest and a body in motion wants to remain in motion. This law applied to current flow in a wire is inductance. We only have inductance when the system is changing state. The rate of change effects reactance. It is harder to produce a rapid change than a slow change. Inductance is referenced to a given condition and reactance is referenced to the operating frequency. Now how does this apply to a coil?

Take a piece of wire 1 meter long and stretch it out straight. Measure the inductance. What would you expect to measure? 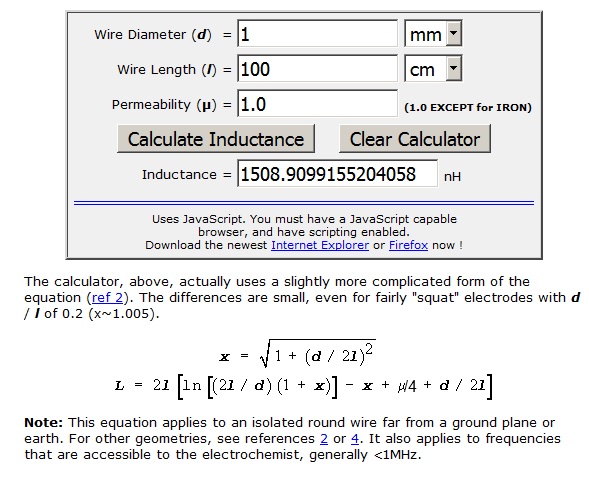 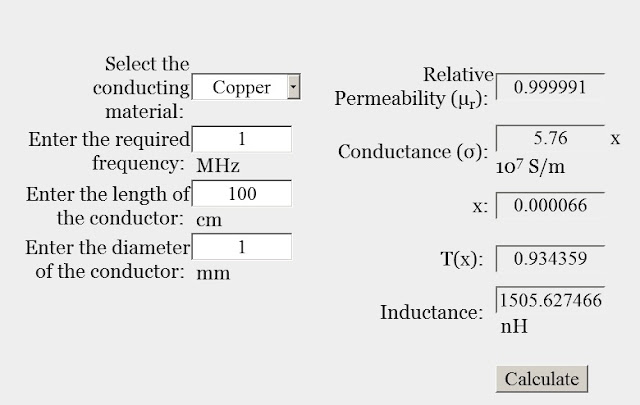 Here is another calculator. About 1500 nH again.

The thing to remember is that a straight piece of wire has inductance. If it is suspended in free space it should match the calculated value. Lay it on the ground or a metal desk top and the reading will vary. The math is designed to determine the inductance of the wire ignoring in perfect surroundings. In a coil there are other factors which must be addressed.


Now you should see that inductance is not as simple  as you might wish. The wire has inductance based on the laws of inertia. A coil will have an effect on itself this is self inductance. A transformer has mutual inductance between the winding's.

If you are not familiar with the right hand rule and the left hand rule you should do some research on them. The simple matter is that inductance is opposition to change. The basic rule for generator and motors or electromagnetic action are based on magnetic fields and electric fields and motion.  Our power source applies EMF. This EMF produces current flow. The current flow produces a magnetic field.Motion produced when a magnetic field expands or contracts will produce opposition. This opposition is Counter EMF.

The law of interia again. The EMF produces a change. The Counter EMF opposing  the change in the wire is inductance. As the field expands it passes through other windings in the same coil by the process of induction produces Counter EMF this is self inductance.  In a transformer the coupling is through mutual inductance , magnetic coupling between the primary and secondary  winding. Stray capacitance in the circuit will have a similiar effect as the secondary of a transformer. Any current which can bypass the windings will reduce the self inductance. At resonance this effect will become null because the stray capacitance and the circuit capacitance combine to produce the capacitance needed to produce resonance.

I said all that to get to this one point. When you wind a coil all the factors come into play and the simple answer isn't always the best. Sure capacitance comes into play as does self inductance and wire resistance and skin effect.

The applied EMF sees the wire as a linear resistance and therefore the drop will produce a linear potential between windings. (allowing for a small difference in length as the coil builds) For the sake of easy math assume the 4 layer coils has 18 millivolts across it. now compare the difference of potential between adjacent winding. With 18mv applied and 1 mv per turn turn 15 and 16 have 1 mv difference of potential. Turns 18 and 14 have 4 mv difference. The e-field between the plates of a capacitor determine it charge which directly relates to its capacitance. The disorientated e-field of the bank wound coil produces an effective capacitance of the two outer layers. This would be less than a straight wound coil.

If the coil were wound straight down the form and back the first two rows would be:

The bank wound give a difference of 1 to 4 all the way up to 18 which is the only 5. The common wound coil gives 6 straight down the row. These winding still have the same magnetic coupling between windings and an e-field of higher value. The e-field bypassing a portion of the signal reduces the measured inductance. 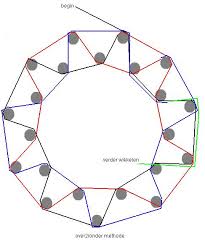 *Actually the basket weave was developed to reduce the proximity effect. Which raises the RF resistance reducing Q. That's another story. Subject for another post.

** If the field expands and contracts from the inter circle ( center of the core ) it passes through the turns. This is (self) inductance. The induced currents passing through adjacent loops produces mutual inductance. This produces an effect called proximity effect.

*** The (self) inductance is what we desire. Mutual inductance is only desired in a transformer. I emphasize SELF as opposed to mutual because there seems to be some confusion which had lead to the assumption that their are the same.
Posted by Reset at 2:30 PM 2 comments: