May can use this when we build a front-end for our receiver. Storing it here so I will not lose it.

Storing a couple of ideas for future projects. 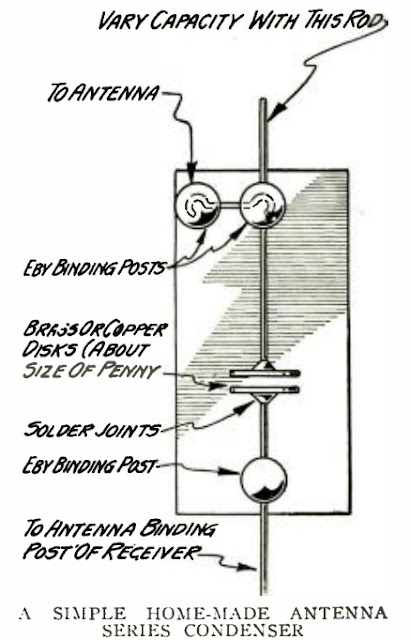 This simple two penny coupler could come in handy so I'm filing it while I have it handy. We had a discussion about making and using gimicks. Twist two pieces of insulated wire together and use it as a capacitor. It works but to adjust it you have to trim. twist , or untwist it. This one uses binding post but you could thread the wire (12 gauge is the size of #4 screw) and make a screw adjustment. 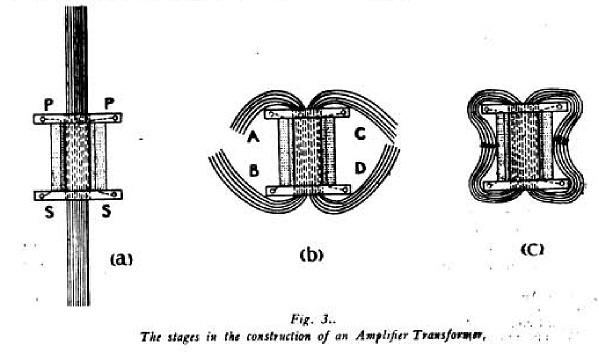 Here we have another way to core a transformer. I've used this one and the toroid. They both work. I don't know if one is better. Maybe some time I'll build two cores and wind them the same then use toroid on one and this method on the other then have something to compare.

EDIT: This method is easier to provide an air gap. The toroid is easy to install and works well in circuits that don't require an air gap. 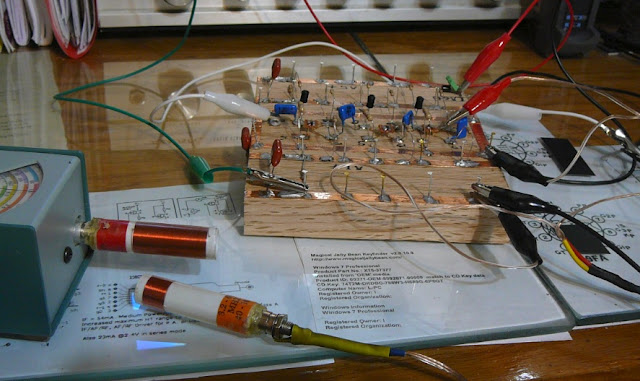 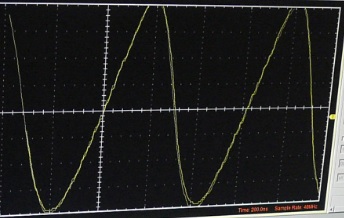 The scope is reading the output of the last stage. pretty good signal. 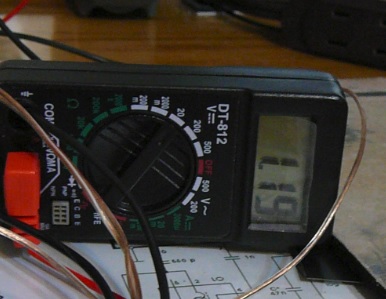 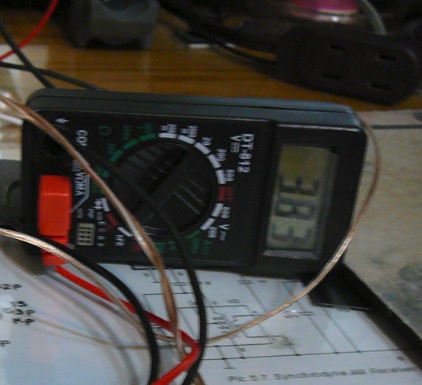 The 4 Volt bus is 3.83 Volts. If the designer wanted he could use a pot instead of fixed resistors but I think it's close enough. Time to find out. I put the coil I made in the unusual IF post and a ear phone on it and lots of rush hissing in my ear. I used a screw driver as a core to adjust and I hear a weather report. I waited for the station ID and it was WWL New Orleans. I ask google and he said I am 135 miles from them. Not to bad my antenna is a test lead clipped to an AC duct. 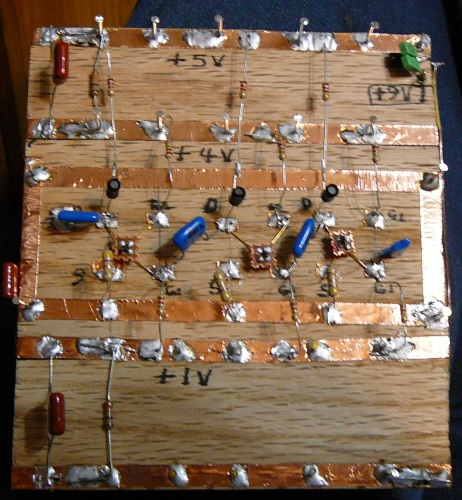 Close up of the amp. I have the parts spread out so it's easy to work with. I'm using inductors in the drain circuit and capacitor coupling. The five blue things in the middle are 8.2 nfd caps. I'm thinking I will replace them with 10.7 Mhz resonator and have an IF strip. The circuit works but I probably should put some decoupling caps in it.I posted this picture so you can see my use of copper foil (found in the stained glass supplies) and head pins (found in the jewelry making supplies). The foil provides a bus to solder to and the pins can be used for wire wrap and clipping test leads.

Examing the datasheet to see what the MOSFET biasing should be. 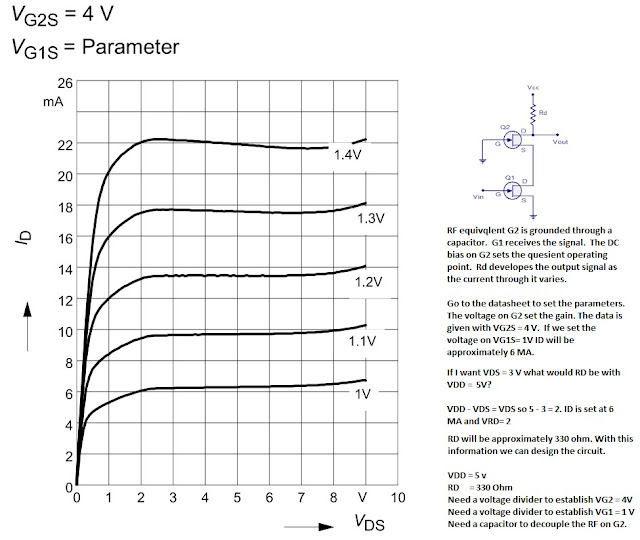 Another look at  the dual gate MOSFET. It could be a spin-off of a darlington pair. A darlington has two transistors on one chip. the base current of one is the emitter current of the other. Using this arrangement gives a very high gain . Input B is amplified by the first transistor producing a high input the second transistor. 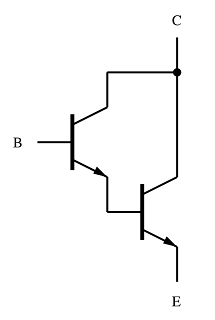 What we would call a normal chain of amplifiers would be a cascade circuit. In a cascade system the collectors currents are isolated from each other and the stage are independant. You could build as many stages as you desire. With darlington circuits you must build with 'paired' transistor. Now for a look at the dual gate MOSFET. 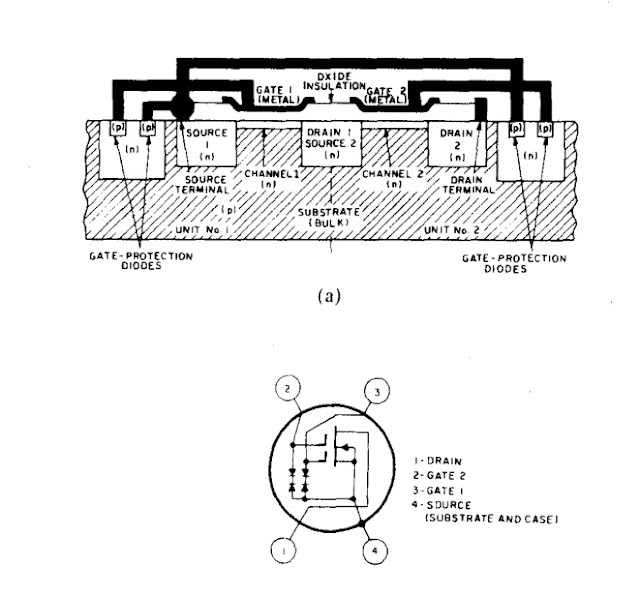 As can be seen the chip has source 1, channel 1, drain 1 and source 2 as one element, channel 2, drain 2.
There are two transistors in series. This is called a casdode circuit. Let's take a closer look at a cascode circuit. 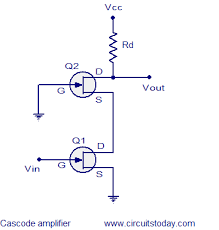 As can be seen here this is a common gate amp 'stacked' on a common source amp. Why would we want to build a circuit like that? I hope to answer that question next post.

How many stages should a set have? The 1923 Popular Radio answer to selecting a radio. 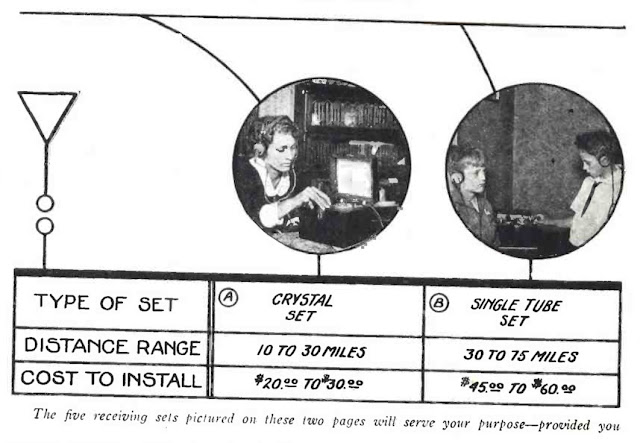 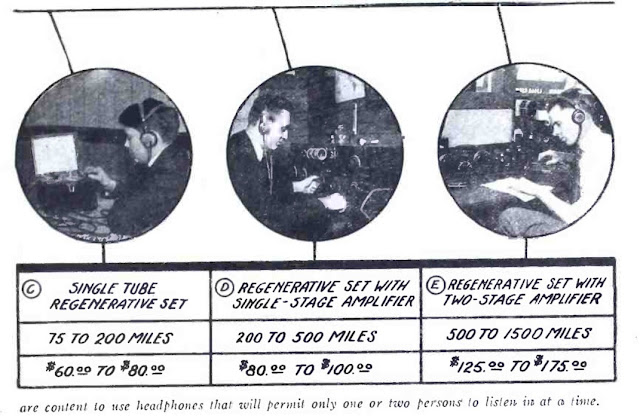 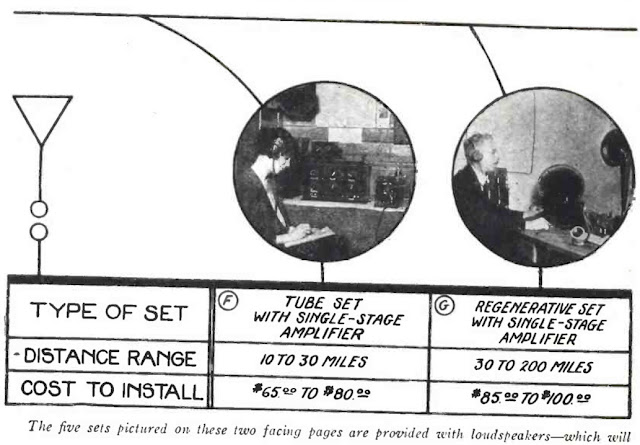 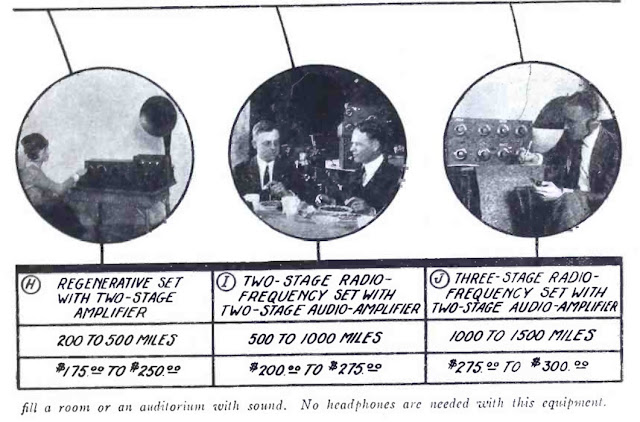 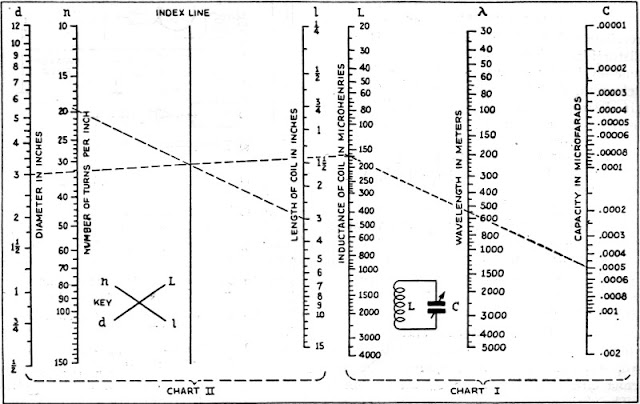 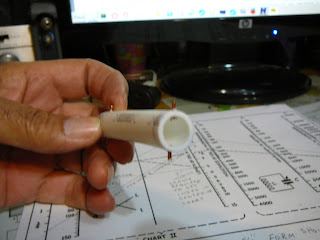 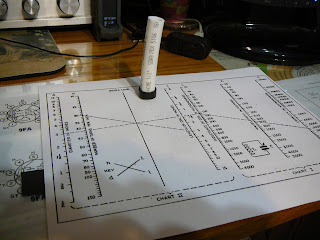 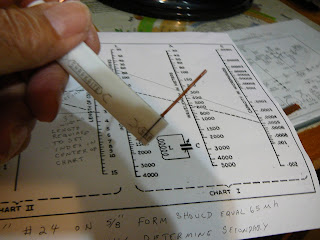 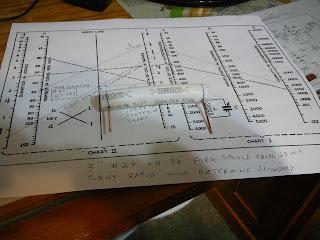 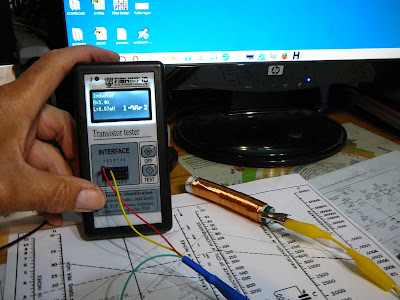 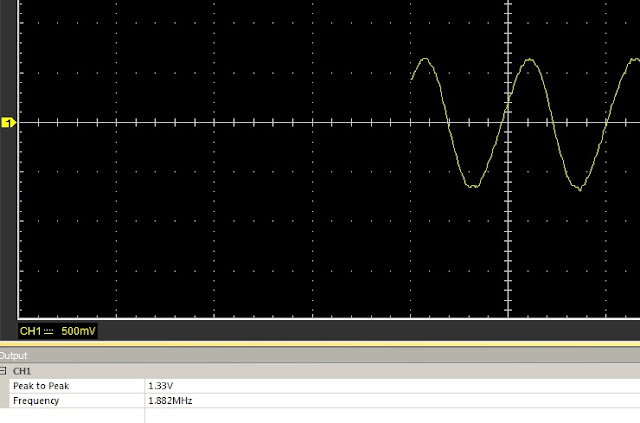 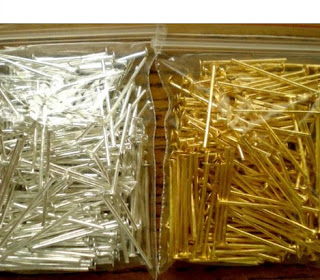 You can go to any hobby supply with a jewelry section and get a pack of head pins. Gold or silver plated will work. 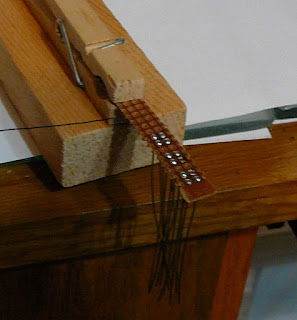 Place them in some perf board and tin them. You don't have to tin them but I think it works best. 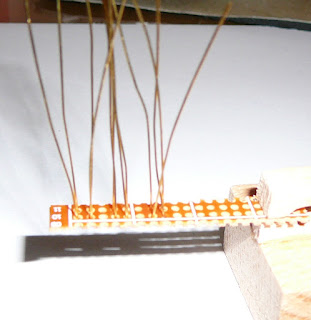 place the chip on the board and solder them. You will have leaded transistors. 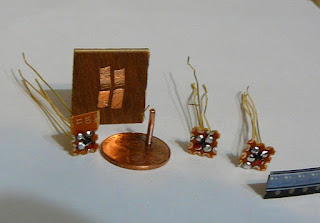 Here I have separated them. I put a red dot on the source so I can ID it. You could trim the board and  put a drop of epoxy on them to make it more like a transistor. 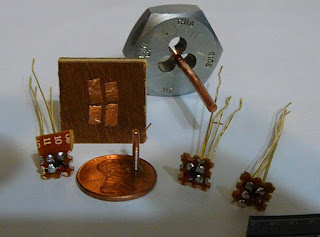 Hats off to Andy again. When I presented the thread on soda straw variable inductor he suggested using #4-40 screw to get fine tuning. The 'rod above is #12 solid copper wire. It's a perfect fit in the #4-40 die.

Some more circuits to build with 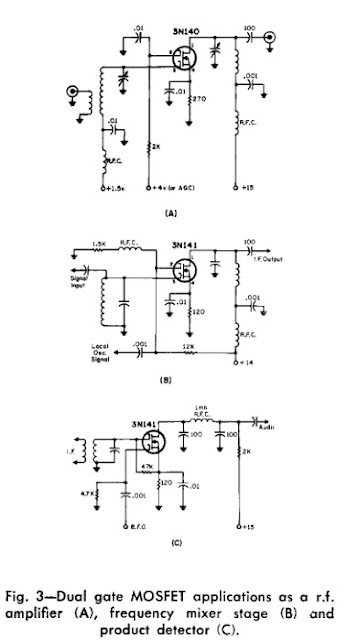 Some more circuits. The list is RF amp, IF amp, mixer, product detector, and regen detector. With so many building blocks it could be a regen or superhet or direct conversion. 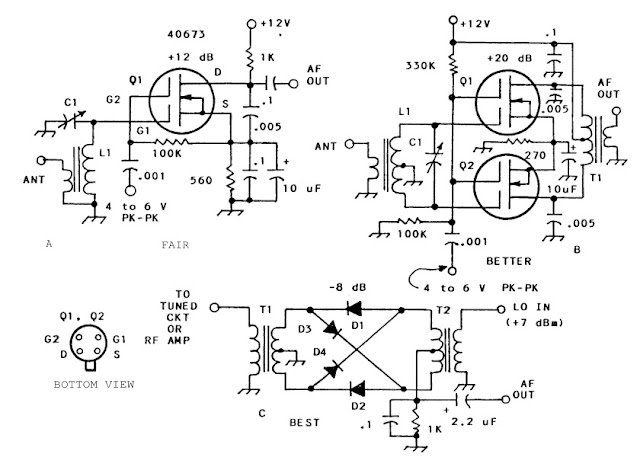 Now for the final step in the present journey. The dual gate mosfet. The audio amp in my last post used a bias adjustment and the signal on the same element of the mosfet. The dual gate separates these two functions and enables the use of two inputs or a bias and signal  Discovering and using the dual gate mosfet will be the objective. Years ago I bought a few of them to use in a short wave receiver, The new old stock prices will give you sticker shock. Fortunately they are still avaiable in surface mount. that will be the subject of the next post.
Posted by Reset at 7:03 PM 2 comments: 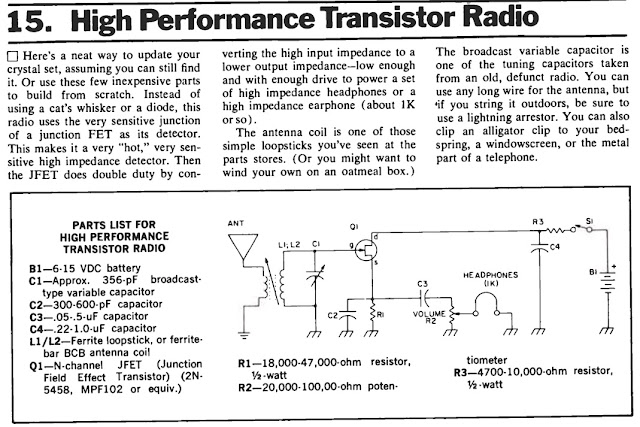 The JFET radio. The addition here is R3 which forms a voltage divider with R1. It limits current without over biasing the FET.