This was so simple even I could do it. No math just pick some values to limit the current and set the bias. I'm looking at about 1 ma current draw.

I mv in 500 mv out. 1 mv will rattle my earbud 1 volt is loud enough with my ceramic head phone.

The frequency response is well beyond my hearing range. I put it on a bread board and put a diode, coil and antenna on the input. It plays my local station.
I made this circuit using 2SK669's  before and it was a good build also.
Posted by Reset at 9:02 AM No comments:

Usually when we lace a bundle we just wrap the string around the wires but what if we want the wires to lay flat? 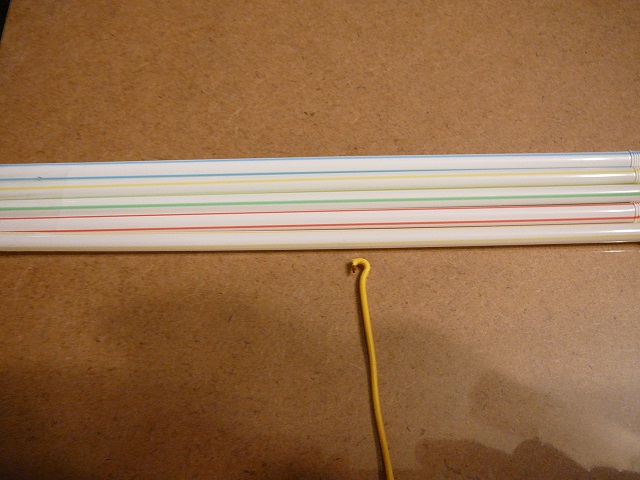 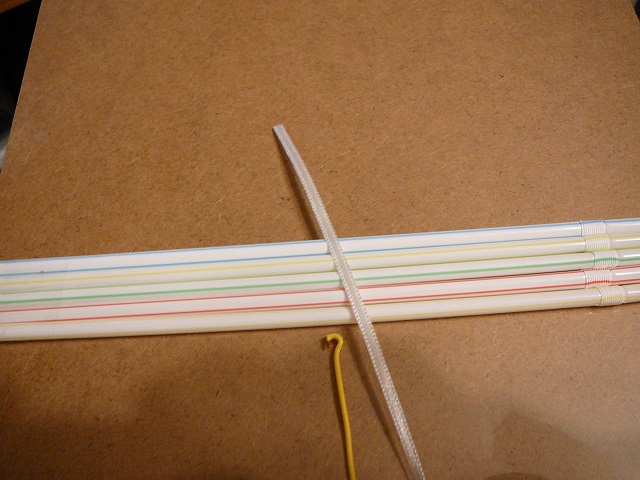 Lay the ribbon on the cables with a long enough tag to tie it off when finished. Take the ribbon under and over to the first gap between wires. 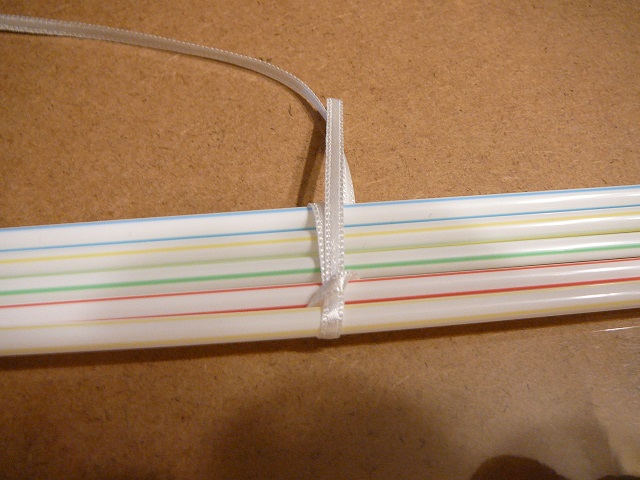 Wrap under the main tag and back up then down through the second gap. 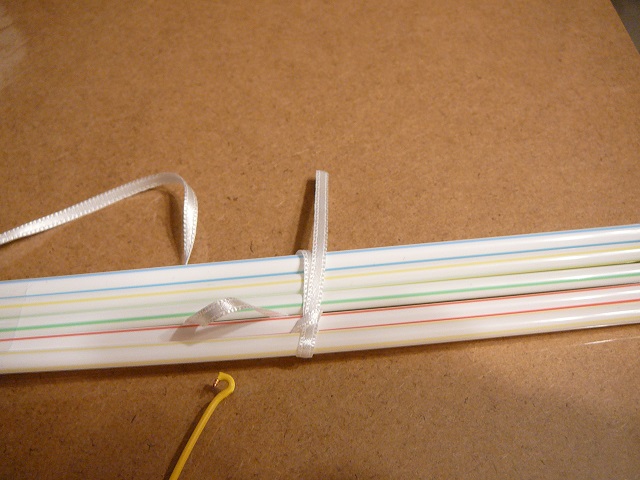 Wrap the tag and back up. 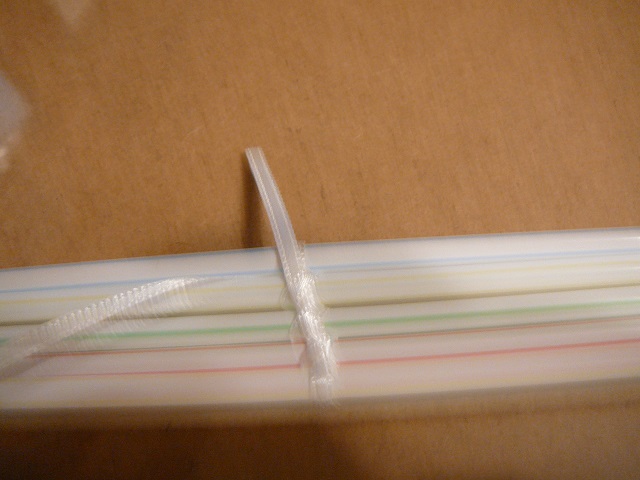 Keep spiraling down - over - up and down the next gap until you reach the far side. 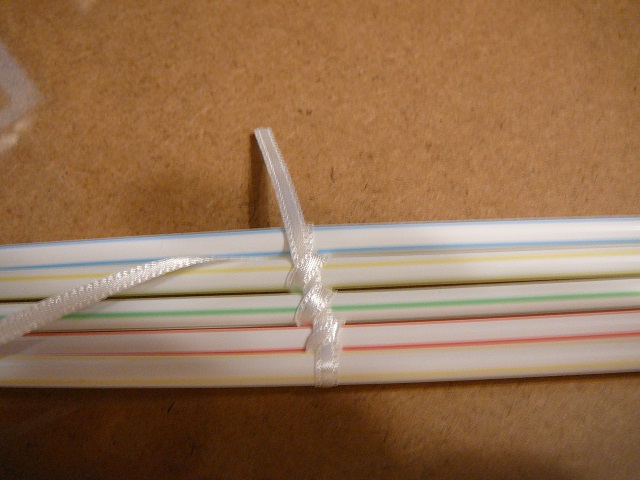 Now bring the first tag under and up the right side. Tie the ends off and trim the ribbon. 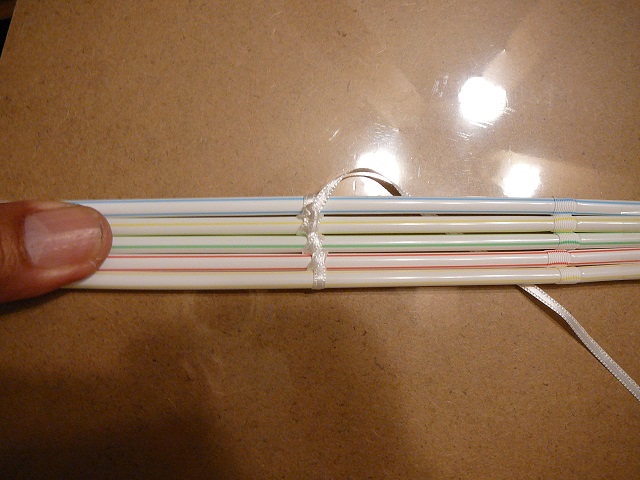 Repeat at the other points needing tying.
If you use dental floss you can get a needle with a big eye and sew the wires in place. Using a needle will aid in separating the wire too. If they get a twist you can put the needle between them and iron the twist out by running it down the wire run.

A MW RF amp using the data from the previous post

The yellow is the half power points. The red is the MW band.

Different transistor. You can try others to see which are useful in the desired application.

Setting the parameters for a stage with a 600 Ohm generator, 10ufd coupling cap, 2.4k Ohm input Z, and 1 nfd input capacitance.  10 Hz to 300 KHz bandpass. Now change some values and see what happens.

Reducing the input capacitance to 10p raises the high end to 30 MHz. What determines this value? The transistor inter-electrode capacitance, Beta, and strays. How would we reduce it?

Raising the input Z made the response worse.

So the question becomes how can the designer control the circuit reactance? Maybe the question is how to work with what he has to get max benefit?

So build the circuit in SPICE and try different values. Look at the transistor datasheet and see what your real world values will be. Above all else have fun.

The half power point is .707 signal out or when Xc = Rl in a RC coupled circuit. I will show some RC circuits and some transistor amps to examine.

50 Ohm response rolls off below 90MHz

Changing the caps shifted it slightly above 50 Mhz

You can see the RC circuit response is predictable but adding a transistor will cause the curve to shift. The transistor parameters come into play and must be accounted for. Some things are beyond the designers control. So we need to use the manufactures data sheet to see if out transistor will serve our purpose.

It's a simple circuit you can type into SPICE is a minute or two but playing with it can reveal a lot about how the coupling system responds.

The Miller effect and more

The scans are not the greatest but maybe you can read them. The inter-electrode capacitance and stray capacitance are the enemy. And then comes the Miller Effect.
I will post a link to a good book with this information in it if I can find one. 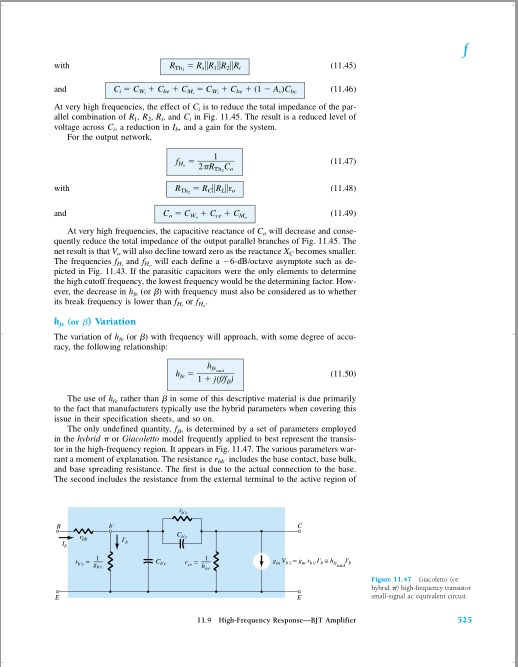 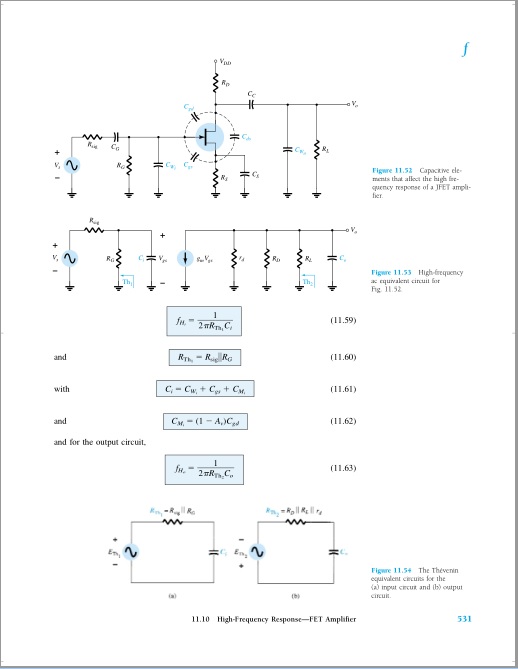 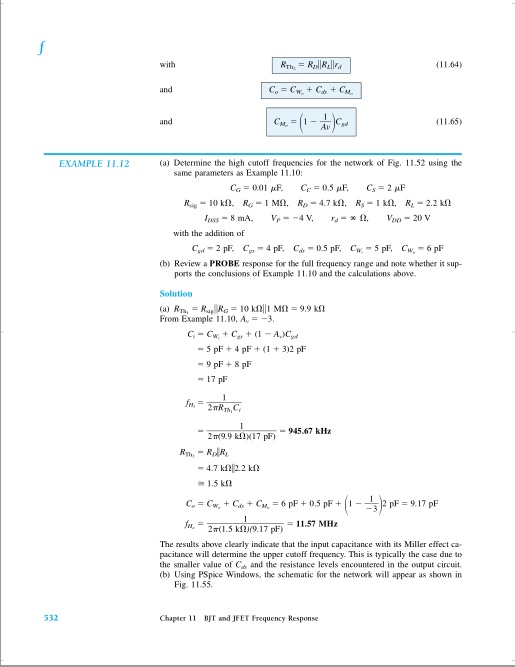 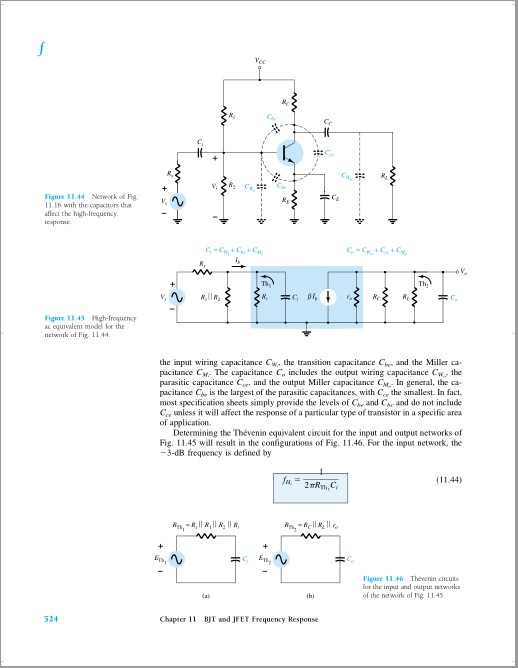 The half power point is where Xco = Rl. Increases C causes Xc to decrease. Adding parallel capacitance causes C to increase. Stray capacitance and inter element capacitance are at play. 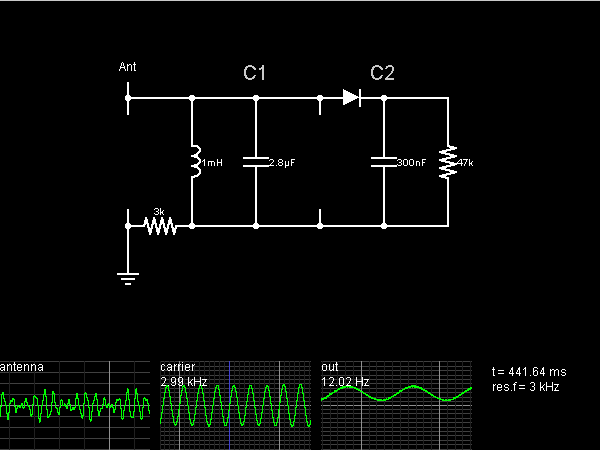 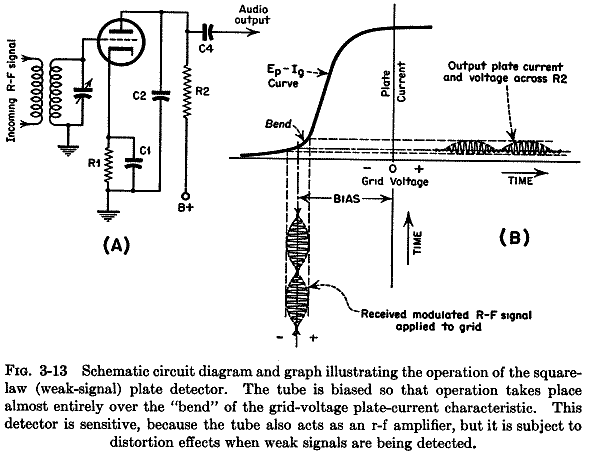 signal tracing as a troubleshooting technique

Looking through the Health manual will tell more than I can in just a few words. The simple AF amp with a probe can be a good addition to a test bench. Especially for the bottom feeder without deep pockets. 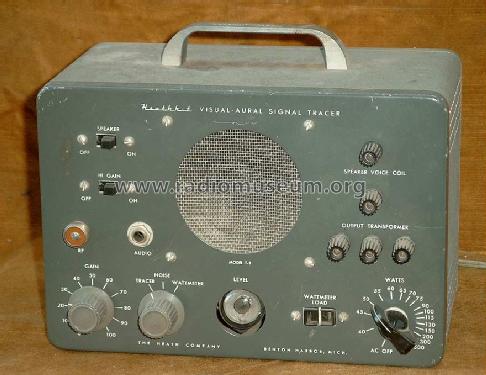 This looks like the one I had as a kid. Notice it had a RF and AF input. The amp was strong enough I could clip an antenna to the RF input and receive our local station.

So you can build a high gain AF amp and a RF probe and be in business. The probe would be like this one. 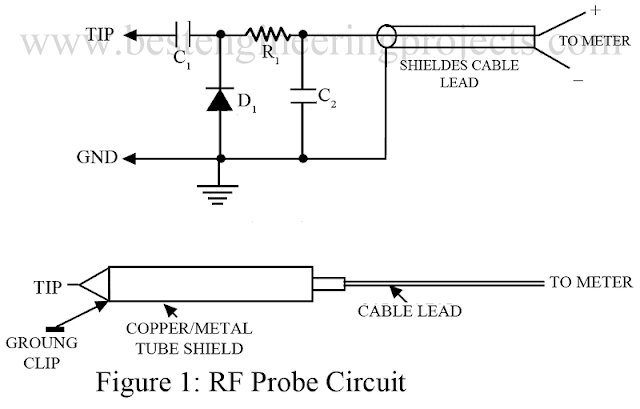 This one is designed to be used with a voltmeter to read RF signals. A search will find more this is the idea. C1 would be small enough to block AF and large enough to pass RF.

Now how would you use it? 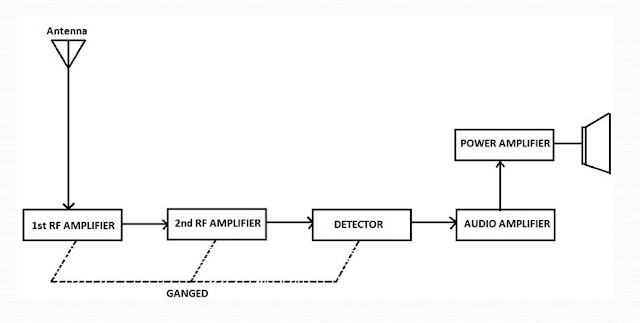 If you started at the first RF amp input and had signal and moved to its output you would expect to hear a louder signal. As you progress through you would be turning the volume down to a good listening level and expecting and increase. When you step over a stage and the signal drops you have found the problem area. Then you troubleshoot that stage...... 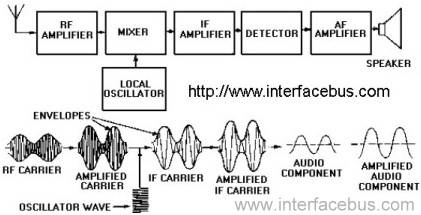 Here they show the signals you would find in a superhet receiver. You just need to know when to look for AF or RF and use the correct probe.

So build an amp and probe and you are set to troubleshoot radios. 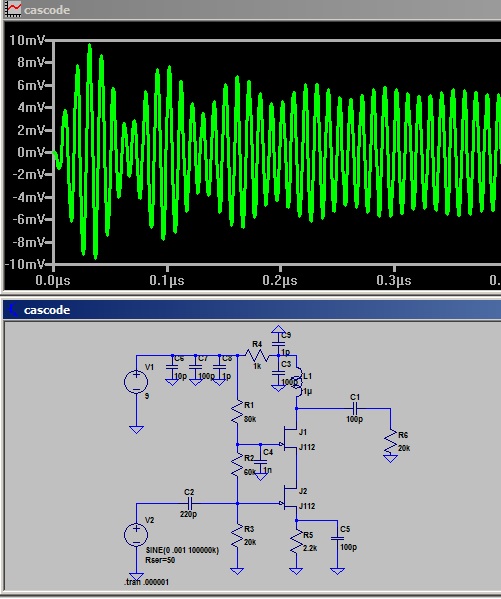 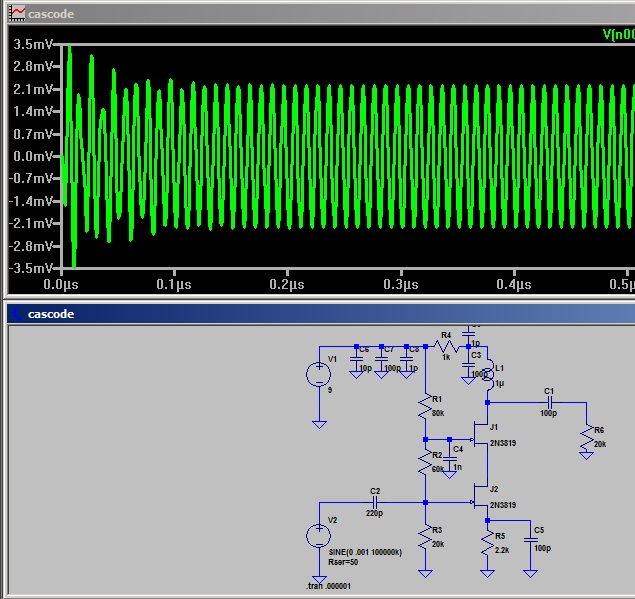 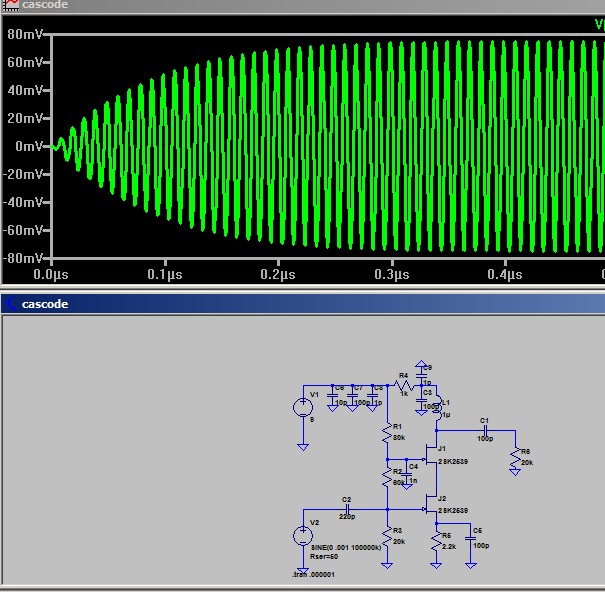 118.5MHz amp Playing with the designer and simulator

In my previous post I offered some programs to help with the design. I will do a couple of quick and dirty examples. Using transistor amp. 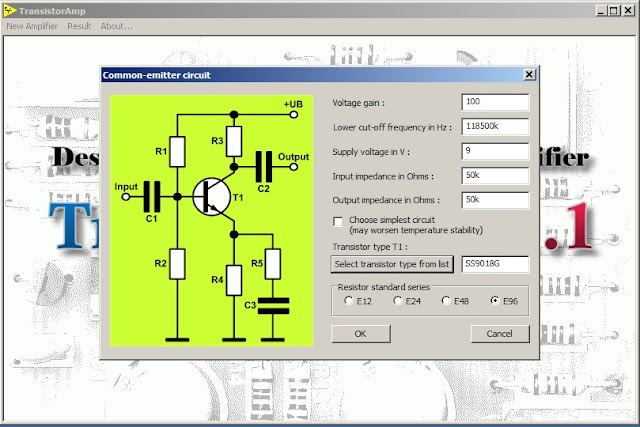 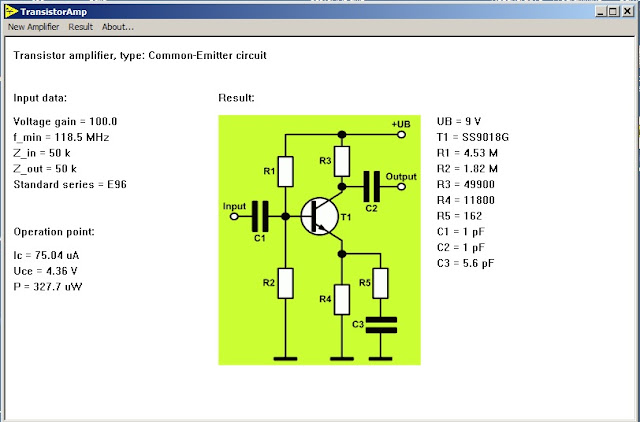 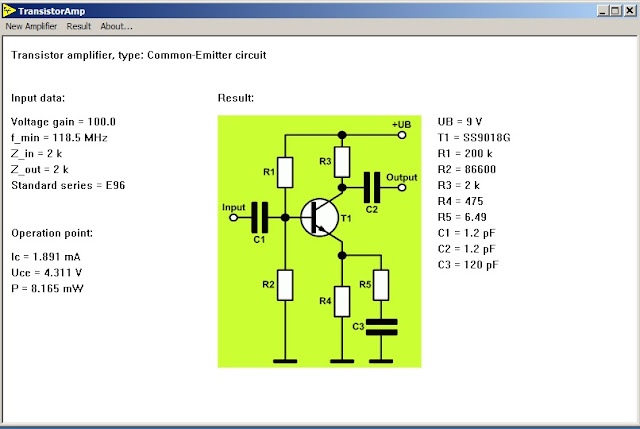 With the Zin and Zout at 2k the values are a lot different. I would go with this one over the first because it will be harder to over load. Remember a low Z feeding a high Z will not load up. A high Z feeding a low Z will load up. With less than 2 ma it doesn't cost much. 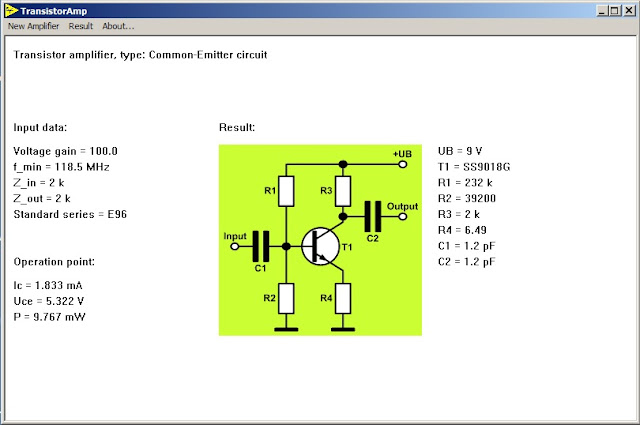 I did a simple circuit to see the difference. This circuit would be more temperature sensitive. It is still the one I go with more often than not 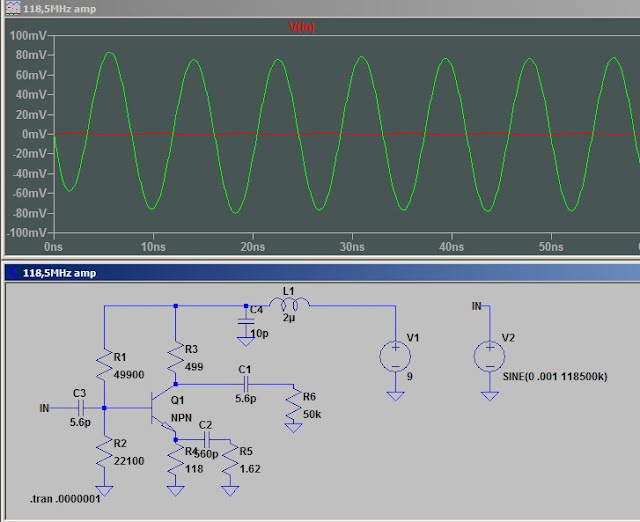 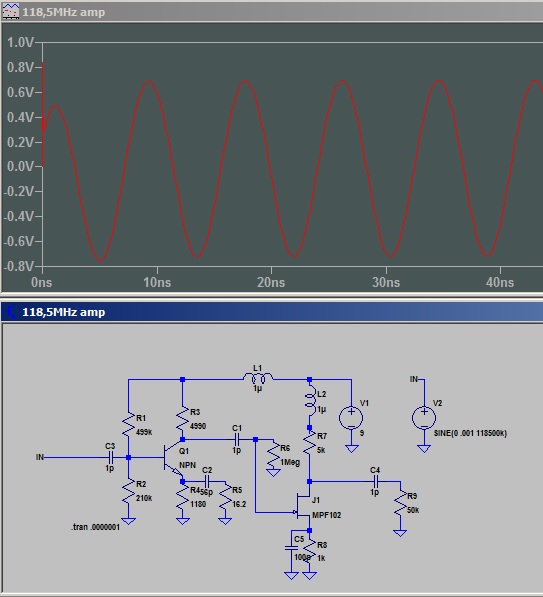 I put in a second stage to see how it worked. 1 mv to 800 mv?
If you build this circuit in sim change the values of  L1 and L2 to see their effect.