We can make a Lambda Diode equivalent with two JFETs and it function much like a Tunnel Diode.

We can make a SCR equivalent with two transistors and it will function much like a SCR.

We can use complementary transistors and make a remote base transistor which acts much like a Point Contact Transistor.

The PCT collector is formed after fabrication. This forming causes doping which produces the PN hook. A PCT will not function without the PN hook. If we simply make a point contact diode with two points we have to parallel diodes but no transistor action. forming one point creates the hook and transistor action. Clear as mud? Lets look at the PCT structure.

The two diodes are just two PN junction sharing a common wafer until the collector is formed. The phosphorous in the wire is diffused into the P cathode forming an N collector. Fig 309 is the equivalent circuit made by junction rather than points. The center P is the remote base. in a SCS it would have a pin connected to it. The SCS is basically a SCR with a cathode and anode gate. The two gate connections allow the SCS to become a SCR or PUT. Fig 309 was a common device in the early days of semiconductors. Anywho the secret of the PCT is the junction formed when the collector is pulsed with current and the remote base transistor hidden in the device. Once you understand that you can use complementary transistors to make the equivalent circuit and you should be able to understand there is a great difference between the PCT and the junction transistor. Anywho lets take a look at the equivalent. I show the voltage and current in the analysis. 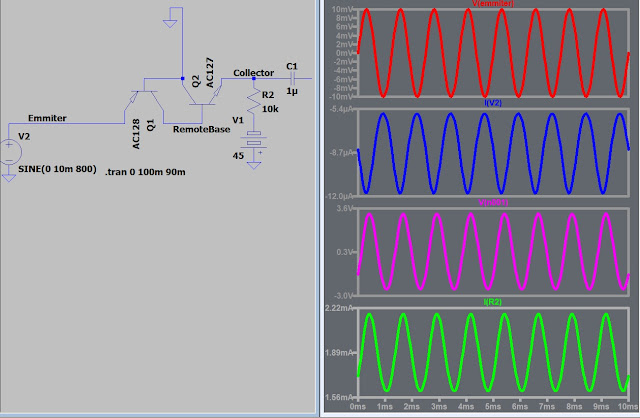 The forever dispute about transistors is do they amplify current, voltage, power etc.

The PCT has an alpha greater than 1. It amplifies current. Yes?

Micro amps in mill amps out. The current flowing threw the load resistor drops voltage. The current being higher the load voltage is higher. Careful don't start that back and forth again!

You can work it out in your own mind. It could be Q2 is a common collector amp and what I marked Emitter is actually  the remote base?