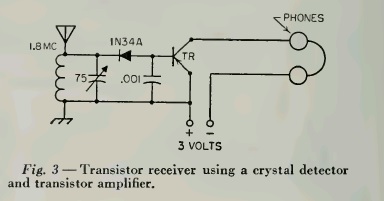 A circuit like this will be presented on the radio board forum as a circuit someone built. The board experts will proceed to tear it apart. The following series of screen shots will address the circuit operation and the surplus or lack of parts.

R1 represents the head phones. This is Ir1. as you can see it does indeed have an audio component in the output.

This is the base voltage. The transistor is biased on and receiving the AF component. It look a lot like the previous shot. Heavy mix of AF and RF.

I added a capacitor across R1. It does seem to filter out the RF. From what I see I would say the capacitor serves a purpose.

The 'experts' say the diode is redundant and the base emitter junction will detect without it. I removed the diode to test the theory. What say yea?

I put the diode back and tried a different transistor. Looks good.

Sometimes we seem to think the holy grail diode will be the lower forward voltage device we can find. Testing that theory here by using a low potential diode. More on that later.

This is the best circuit. What makes it work as it does? It uses a silicon diode, a silicon transistor and a filter capacitor.

The original circuit used a germanium diode and a germanium transistor. The key is matching the components. Look at the diode polarity. When the input goes negative it passes threw the diode and charges the .001 capacitor. The capacitor then biases the transistor and turns it on. Without the diode the capacitor would discharge on the positive half cycle. Turning the diode puts the wrong polarity charge on the capacitor and turns the transistor off. The original circuit doesn't have the filter across the headphone, it should. Some say the phone leads will provide the capacitance. While it may be true having RF in the phone leads is not good practice. Some say hand capacitance is a big issue. Perhaps it would not be if the phone leads was properly bypassed.