Point Contact and Junction first generation circuits to play with.

The original release of the transistor was not an over night thing. Some dealers would only sell to businesses and some would only sell in quantity. As a teen I worked in a Radio & TV repair shop and could buy through the store account. They were not cheap but i did get my hands on a few to tinker with. I don't think the point contact was ever readily available. The early junction devices were easier to get. Anyway the first published transistor radio I am aware of was in 1950.

The interesting thing here was they state in the article the transistors were difficult if not impossible to buy. I guess you could say for information only? The next generation transistor radio would be this one. 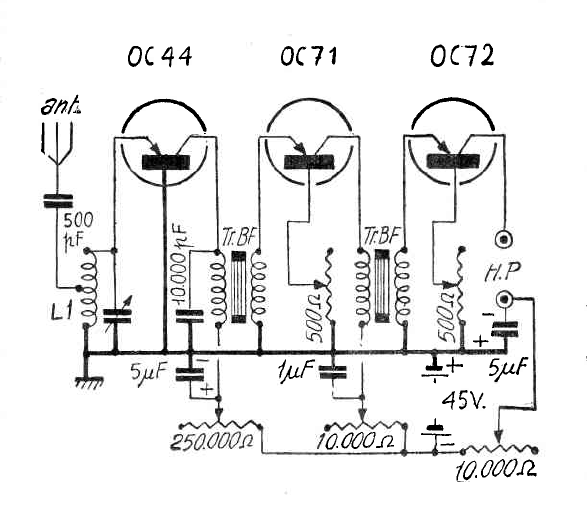 I made the first one using sockets so I could try different transistors. I used some transformers I have in the shop. It worked! I have several transistors in the bins that worked in the circuit. In order to do it right I will have to wind transformers and make the point contacts. More on that later.
You can see the second one is more complicated with all those pots adjusting the bias. What else is different? If you made this circuit with modern transistors it would not work because the Emitter - Base junction needs forward bias. Let's take a look inside the transistor. 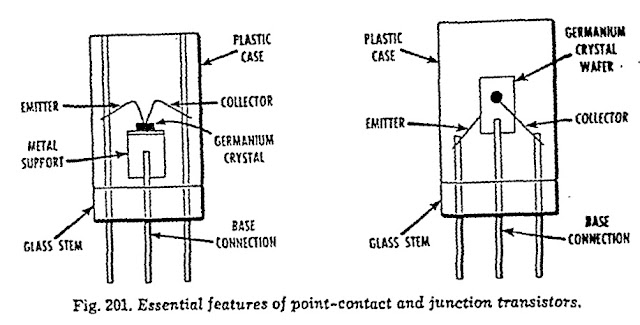 Here we have the first and second generation transistor. (Inside design.) The point contact has the point placed in contact and then 'formed' with a pulsing current. This creates an alloy at the point of contact. The junction has a ball of solder on the point which is then soldered to the wafer. In essence they are the same but the micro alloy is more easily controlled in the junction transistor. It is not apparent so a little explanation. If I were mass producing the junction units I would cut slabs from the Germanium bar to fit the job and then wash it to remove impurities and form a dip for the solder to flow into (the emitter and base on opposite sides of the wafer establish the spacing.). Then they are ready to be soldered. It would be an assembly line operation step by step .....
The point contact on the other hand would have the slab soldered in place and then the cat whiskers positioned and attached. The two points must contact an active spot on the slab and closely spaced. You might set one wire and the not be able to set the second. This requires moving the first. When they are finally positioned they must be formed. The forming process will not be repeatable because of impurities and surface oxide ......

So you could have a line making cans and attaching lead wires. Another soldering the wires to the slabs and a third placing the wafers inside the cans and attaching them in place. This would allow more production in making the junction transistor. Faster and cheaper takes the market.

Anyway plans are always subject to change but the present plan is to build the two circuits and see how they function. transformers to wind and transistors to collect or make.
Let the fun begin.