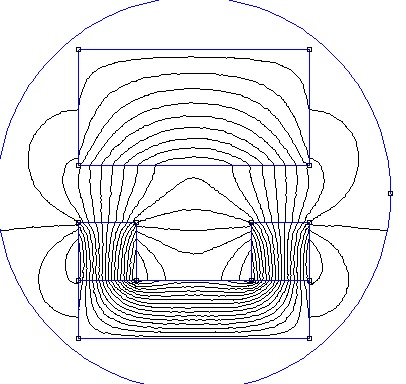 Here we see a transformer core with no gap on one side and a large gap on the other side.
Short review of inductance. In general what we call inductance could be called self inductance, it is the magnetic fields at work in the coil producing them. The other inductance is mutual inductance it is when two or more coils interact. We only have inductance when the field is in motion. If we apply a DC current the inductance will be in effect as the field builds and will cease to function once the field reaches full strength. Removing the DC allows the field to collapse and we see inductance as it falls. So in order to maintain mutual inductance between our coils we must not allow the coil to saturate the core. In a power transformer an air gap is put in the core to prevent saturation. Gaping cures one problem but creates another, flux leakage.

With a conventional wound toroid (as above) we have the wire outside the core 5 times as much as inside. It is able to couple its surrounding and create flux leakage so as frequency increases we see more losses until it becomes as though we have an air core. One solution to this is the trifilar coil. Twisting the wires to produce a transmission line and then winding the core with it.

Fair-rite has an assortment in their catalog. For HF the 61 material seems a good choice. I made a couple simply by bending the wire as a bobbie pin and inserting both ends through the holes then passing the ends back through and the primary is done. Fold the second wire, put a twist in it about 1" from the fold and insert the ends. Then run the wire through the core to make nine turns. The 3 turn to 9 turn transformer is my top performer. One thing to take note of here is the wire is inside the core a large per centage of the time. This helps keep leakage to a minimum.
I went with 61 material and found the cores for 23 cents in the smaller size and 33 cents in the largest. I think 43 material would be a good choice and hope to try some later.
I am using the 3T to 9T based on a mini circuit transformer.
Posted by Reset at 6:26 PM