I made some more point contact transistors and have been working on the forming process. The best yet is 5 shots with a 680ufd cap charged to 10 volts. As the junction forms the process is quicker so if 5 shots doesn't quiet do it try 1 more and test. It will go from close to to far in a single shot so reducing the charge is good when it is close. The old Point Contact were very reliable and stable once developed. Some people say it is the opposite! They were produced by hand one at a time and the variables had to be accounted for. The junction transistor was more easily produced, that's all. Cheaply made mass produced product win more often than not.
Anyway I wanted to post a simple tunnel diode fabrication. It looks like this. 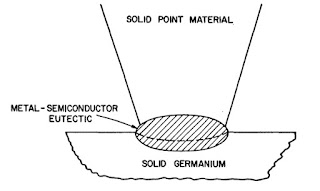 If you can build the point contact diode and form it you can use an Aluminum cat whisker and form it more heavily than you would a transistor or detector diode and the result is a tunnel diode. So many things to try and so little time.
Another project in the making.