A younger guy on a board was talking about the early transistors and it seems his opinion is we (the older guys) were stupid because we weren't born knowing how they functioned and how to fab the circuits he uses today?
It is a little amusing sometimes the way people who grew up with electronics see thing differently from the ones who have never been without.
Then the self proclaimed expert begin to explain how they work? In his expert opinion all the theory being taught for the last 70 years is wrong.
What really made me go, HUH? Was when he declared Sze's physics was  irrelevant and flawed.
Two first year students used Sze's book as as guide and made working transistors yet Sze is flawed?
The major manufactures us Sze as a standard and build chips with a billion transistors on them and they work yet Sze is flawed.
Anyway rant is over. I think the three who came up with this were genius's. 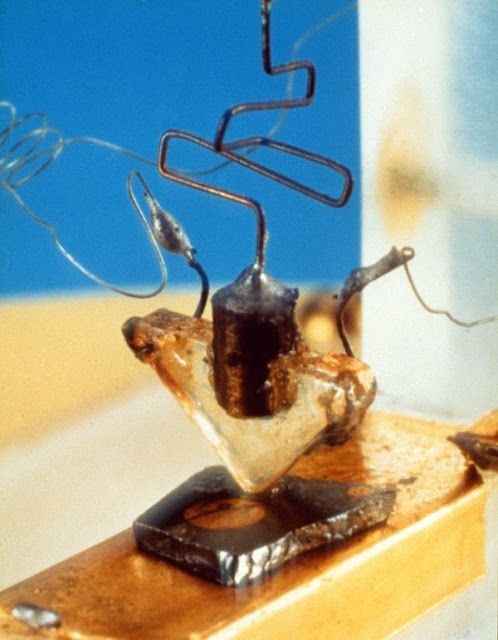 Seventy years later with their example to go by some still have trouble replicating it. Yes that was the first transistor ever presented to the public. I guess I was not along in thinking them genius's, they were given the Nobel prize for it. Here is some more genius in action. 92 point contact transistors and 550 diodes equals computer. What a project that was!

That guy buys a TA7642 and puts a few components on a board with it and thinks, "Oh what a brilliant fellow am I!". He even calls it a one active device radio. I guess he doesn't know the TA7642 has 10 transistors in it?

Anyway the point contact was the first transistor to achieve military standards and it was used in early computers. The cost and lack of supply channels was probably what killed them. The early components were soldered together so excess heat in installing them could kill one. This applied equally to the junction transistors. That was why they came with such long leads. The maker warned to place a heat sink on the lead between the solder joint and the tranny.