Final build of the two stage amp - some observation

This project shows some of the interaction between stages and some design considerations. In any new design we must give and take, make a high gain circuit and have more noise and instability or reduce the gain and be stable with less noise. The final question is 'how much gain is enough?'. Where to put the gain is a good question also. I was throwing out such questions on another project and said the components are only a nickle each so use as many as seems useful. My friend and advisor on the project sent me this. 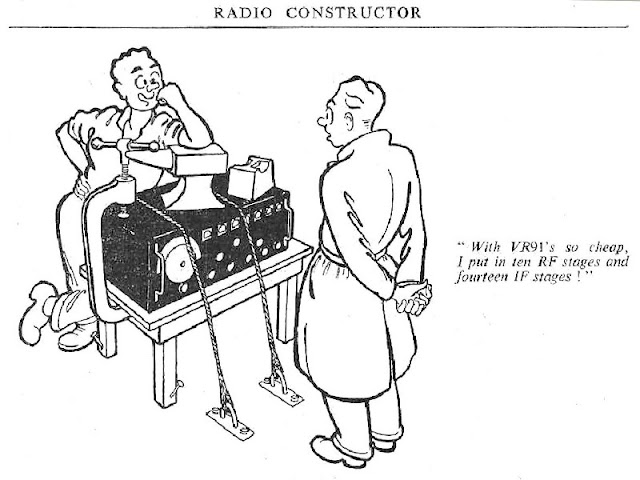 What do you think he was telling me?

Anyway I built the circuit and it was to strong. With the antenna lead about 1" from the amp input I received a station on 1160KHz. It was the USA Old Time Radio Network broadcasting with 5KW night time power Dallas Texas. The map program says 552 miles as the crow flies. This was good BUT I could wave my hand a few inches from the amp and it would react. So I made a couple of mod's.

First I added the transformer.

The response is still good at the design frequency.

Very good actually. The gain is still high.
Time for a little ramble:
In days gone by we had first generation components and our gain and frequency response was limited. These factors were to our benefit. Some of the old radios work remarkably well with few parts. For example with the amp I am playing with I have a local day time station which would 'blow thru' if I don't limit the low end response. The little one stage radio from a couple of post back would be able to tune the band better than one with this amp because the transistor is an audio transistor. The frequency response of the transistor is to low to pass the 1.5MHz signal. Make since? So when they say an amp is good from DC to light is that a good thing? Not really if you don't want to receive the full range. The first step would be to limit the range to your desired segment of the spectrum. In times past the term TVI was common usage. TV interference was generally traced back to the local CB guy trying to boost his signal with a not so linear amp. (sometimes it could be a ham but you know we are more professional and use better equipment?) Any way the opposite can come into play also. We don't need to amplify the TV signals and apply them to the input of our radio. One thing to our advantage these days is the frequency shift with TV signals.
Anyway enough said about that. The question of the moment is 'How much gain do we need?'. Cherry picking figures again but assume a 0 dBm signal will drive our head phone and we want a 3uv sensitivity for our receiver. (This is the spec for a commercial radio I own.) 3uv is -97 dBm so I'll assume 100dBm overall gain is good. So I might use this amp with the reduced gain or just do a new one with a single stage. Another test is called for.

With this amp I clipped the antenna on the input and found my station in Texas was loud and clear. The AF Amp give about 70dBm and the RF gives 60dBm so I still am well above the required.
The AF amp has some AGC so it will allow for some variations in signal.

I have the AF Amp and a workable RF Amp. I may go to a single stage RF Amp. This combo received my Texas station last night. I have been using the signal generator to drive a DBM for the detector next step is to incorporate a NE6X2 or build an oscillator?
I'm thinking a lambda diode oscillator. They are easy to build and will drive a DBM well.