Reversing a transistor hookup - will it work

A subject that comes up now and then is "can the circuit work as connected?" The circuit will likely be a Germanium transistor and then the discussion goes kind of mystic and implies the transistors are just beyond understanding. Oddly the board expert will throw out terms like Ebers-Moll.  Then we hear it is a Germanium being leaky and some other rubbish. So is it possible the circuits work are do we we have a few hundred circuits presented in the old books and magazines that just were untested and will not work?
Oddly when the Ebers-Moll enters the discussion it is with no explanation and is just to impress the readers so let us look at the model.

Ebers-Moll sees the transistor as 2 diodes connected back to back. One is forward biased and one is reversed biased. Would this model represent a real world transistor? Let us look at a couple of them.

This example is 2 diodes sharing the base connection. They are made with the same doping so would be represented by the model quite well. (the exception being the common connection rather than 2 cathodes.) This would be an early transistor such as found in the old books. 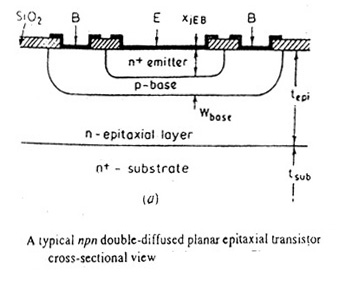 A later transistor is the epitaxial shown here. This time we see n- , n+ and p-. What they tell us is the doping levels are not the same. + is heavy doping while - is lightly doped. The 2N2222 is a planar epitaxial transistor so I will use it for the test. (The 2N2222 is the negistor I used in my simple oscillator.) 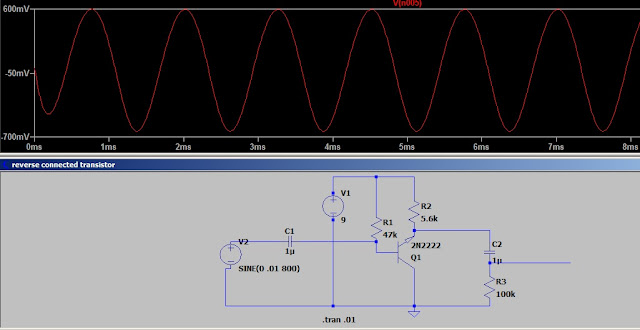 A quick look at this circuit will reveal I have installed it upside down yet with 10mv in I get 600mv out. A gain of 60 with a backward connected circuit! 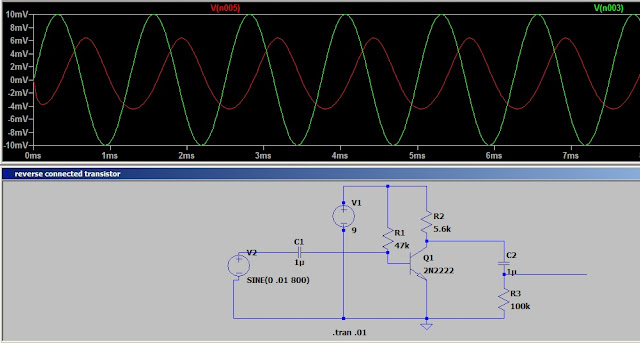 I rotated the transistor to the 'proper' position and now have a loss in signal. 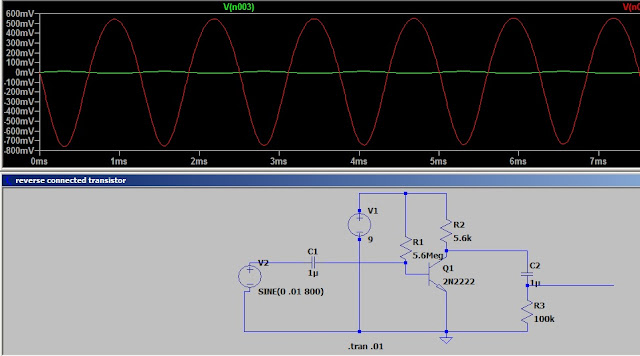 I adjusted the bias and now have the gain of 60 with the transistor installed properly. Why did I need to adjust the bias? Remember the p+ and n-? The doping is so a small base emitter current can control a larger emitter collector current. The heavily doped emitter injects carriers more efficiently.

EDIT: I should point out the power handling ability of the transistor will need to be watched if using the circuit. The question would be ,'what is the base current?' Using a higher base current could burn the base out. It might be worth a test board.
EDIT 2: I think a 2N5550 will work backwards too.
Another circuit to test.
Posted by Reset at 7:32 PM