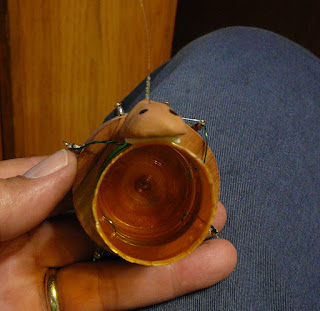 Not much to look at. A round cedar base with a pill bottle in it. coil with 4 taps and an Lamda diode. 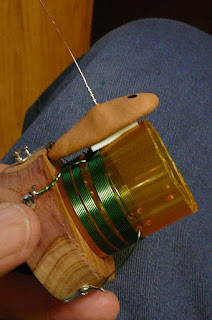 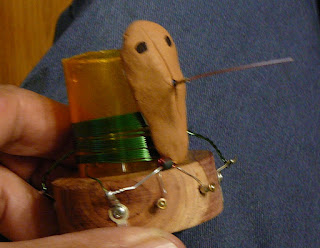 Notice the core with its leads going to the two center terminals. I simply passed the little buggers tail through the core and tied the winding to the output terminals. 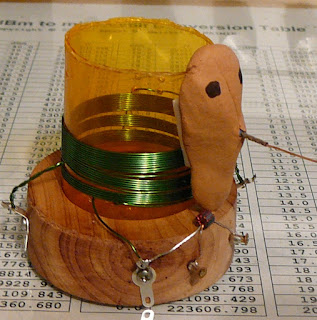 The antenna is positive and I passed the tail through the core for output by connecting the negative power supply lead to one of the other three taps on the coil I get a signal from 3Mhz to 16Mhz.
The output is not as much as I want for my DBM feed so I choose the Andy oscillator. If I need to insert an amp it defeats the purpose of the LDO.

I have built a couple of LDO driven DBM and they function but this build I want to get a little more out of them. So it will be the Andy and a buffer amp. I am thinking a MOSFET amp. It will have a high input impedance so it will not load the oscillator and it can drive a 50 ohm load. I am working with 50 ohm load for this build. Who knows if the AF is designed for 50 ohm load and I use a 64 ohm earbud I will not need an output transformer.

The DBM for this set is calling for .5Volts RMS so next I build the Andy and the buffer that will hopefully produce .5Volt RMS into a 50 ohm load with a frequency range in the shortwave band. Not to much to ask for, huh?

EDIT:
The LDO will oscillate at 3 volts and it is sensitive to voltage changes so a little 3 volt battery and a mike will make a FM transmitter.