how can one amp be used for AF and RF? or Reflexing

When you look at a broadband amp such as the antenna amp on your TV do you understand that the amp is amplifying channel 1 and channel 10 and channel 100 and all in between all at once? If so it should not be to difficult to accept one amp can amplify AF and RF so I will simply show the circuit and offer a brief, hopefully logical theory of operation.
First the basis for circuit analysis. First step define DC biasing. More often than not getting the DC established is the biggest job the rest falls into place. Now the circuit in question.

Mr Andersen says it works so we will accept his word for it and try to see how it works. Again the DC bias is the first step. 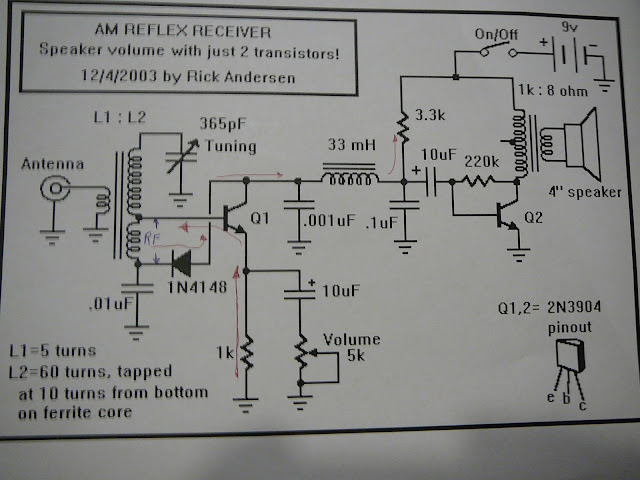 In order for Q1 to conduct it requires an emitter base current. Starting at ground up through the 1K resistor and out the base. Now how to get to the battery? Um, into the center tap and out the bottom of the coil through the diode. One comment was the diode adds a needless extra 0.7volt drop because the emitter base junction is a diode. Hopefully Mr Andersen is smarter than that! Anyway on through the 33mh choke and the 3.3k resistor and switch to complete our path. Now we have established a DC bias and the transistor is switched on.
What do we know about transistors? One thing is they amplify current. A small current through the base produces a large collector current. The amount of current gain is the transistor Beta factor. If ß is 100 and we apply 1 micro amp through the base we get 100 micro amp out the collector. Be aware the RF transformer is in series with the base current and look at the signal on the transformer. 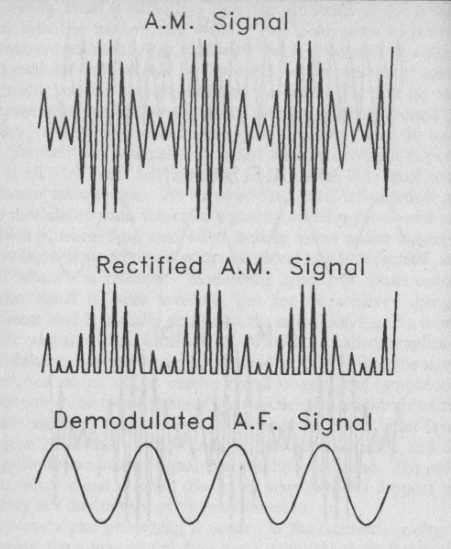 If you can accept that the diode acts as a switch it become apparent the RF is chopping the transistor current and producing a larger version on its collector. So if the antenna can supply a 1 micro amp current to the diode it is being amplified to produce a 100 micro amp collector current. BUT only on the positive half cycle. The collector sees the center waveform and the choke/cap filter it to produce the bottom waveform.
Does that make since?
Just imagine they placed a switch in the bias circuit which is switching at an RF rate. HEY! That might be why they call them switching diodes.
The transistor selection could effect this circuit a lot. I have some with a ß of 1000. Um 1 micro amp to 1 milli amp would be a giant leap in signal?!?

EDIT: As base current increases collector voltage decreases reducing the diode bias. In case you did not see that.That would be the feedback or reflex function.