This post I will put forth a little theory for anyone interested. First a definition, it won't hurt to bad. The coulomb is a very large number that is the number of electrons passing any given point in a circuit in one second when 1 amp is flowing through it. If one coulomb of electrons is on the plates of a capacitor when it hold 1 volt potential it would be a one farad capacitor. If one coulomb of electrons passes through a load in one second one watt of power is dissipated. This may sound like a lot of double talk but the point I'm trying to make is current AND time are the factors to be observed in this little excursion into the world of electronics and magnetism. Oh one other thing about the coulomb, EMF is measured in amp turns. One amp through one turn=one amp turn. One milliamp through 1000 turns=one amp turn.

From wikipedea:
"Inductance is equal to the electromotive force or EMF per unit of rate of change of current. Inductance is measured using a unit called the Henry or H."

This is the basic building block for the following discussion. The main point is in AC circuits time is a factor. When we look at RF the cycles increase and time decreases.
One other point I should make when laying the foundation for this discussion is that there is no such thing as a perfect component. As straight piece of wire suspended in space will have inductance and resistance. If it is not in a void it will have capacitance. So all components will have some inductance, capacitance, and resistance. These factors vary with frequency so we will look at the components in turn as they appear in our RF circuits.For DC analysis we can short coils and open capacitors and do the math. Reactance is based on a change over a period of time. So let's begin with a resistor. 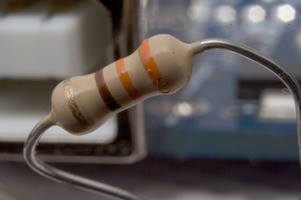 Dc analysis is simple enough. A block of resistive material and two leads. AC analysis becomes a little more complex. Notice the ends swell. It is a block of resistive material with a cup on each end that the leads are attached to. So our simple resistor becomes a resistive block with a coil in series with each end, remember any conductor has inductance so in RF circuits the lead inductance must be considered. The end caps are conductive plates which form a capacitor. So our simple resistor becomes a resistor with a capacitor in parallel and inductor in series. So what does this mean in real world terms? A 10kOhm DC resistor may be 2kOhm at 100Mhz.So what about a capacitor? 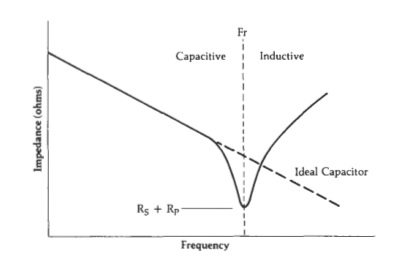 A capacitor is two conductive plates with and insulator between them. Since there is no such thing as a perfect insulator it inserts resistance that must be considered. Don;t forget leads have inductance. Now our simple capacitor becomes an inductor in series with a capacitor and paralleled by a resistor. The dashed line shows a perfect capacitor response to and increase of frequency. The lead inductance and the capacitance produce a resonant circuit which would at resonance be a dead short in theory but has a resistive component that prevents the Z from reaching zero ohm. Notice the circuit becomes inductive above the resonance frequency. So we can use a capacitor above it's self resonant frequency to produce a DC blocking inductor. 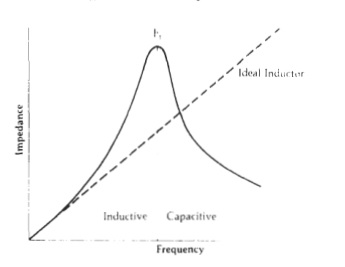 Here we see an ideal inductor represented by the dotted line. Again stray capacitance will cause the inductor to behave a little different in a RF circuit than in a DC circuit. First we have resonance and them the inductor acts as a capacitor. So above the self resonant frequency our circuit sees a capacitor that passes DC.
So our three basic building blocks are a little more complex than presented in electronic 101. Next post I will explore the inductor in more detail and using the example I just presented see if we can make a little since of the frequency responses of different core material.