Last night I listened to WLOC in Kentucky. It is a 60 watt station 550 miles away.  I had to throw in a DX report on that one. Now back to the AF amp. 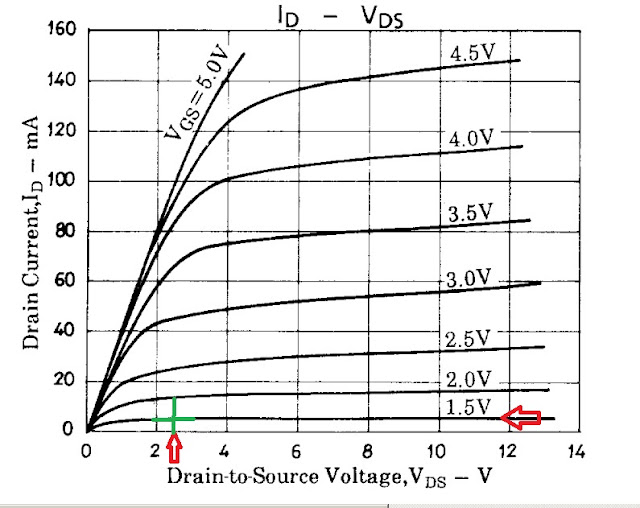 My goal is a self biased amp that will be operating some where around the point above. I could make the load line steeper but I don't want a high current. So here is my attempt at that stage.

I adjusted the gate divider to forward bias the mosfet. And the used the source resistor to provide feedback. I placed the reference at the gate and then read the source. 1.5volts is looking good.

Now to check the source to drain I placed reference at the drain and read the source. 2.6 volts looks good.  I can hear someone asking what's the deal with the 2 capacitors and 2 resistors coming off the drain. I'm glad you asked, they have a couple of purposes. One thing is I may use a high Z headphone
or an earbud. Also there is the old saying electricity takes the path of least resistance. Actually it takes all paths. The high value resistor would have the headphone connected across it and the low value resistor would be the ear bud connection. Let's take a look at those voltage and current values.

First the high Z tap. How much power would 30mv at 30ua be?Would it be enough to drive the headset?

The same test for R4. I drove my earbud with 1mv and it was load enough.
Now I just need a little shop time for the build.
Posted by Reset at 6:48 PM