What have i learned from the memory core.

50 years ago computers had core memory that was a grouping of toroids with wires threaded through them. They were arranged so each had 5 wires passing through.  It would look like this: 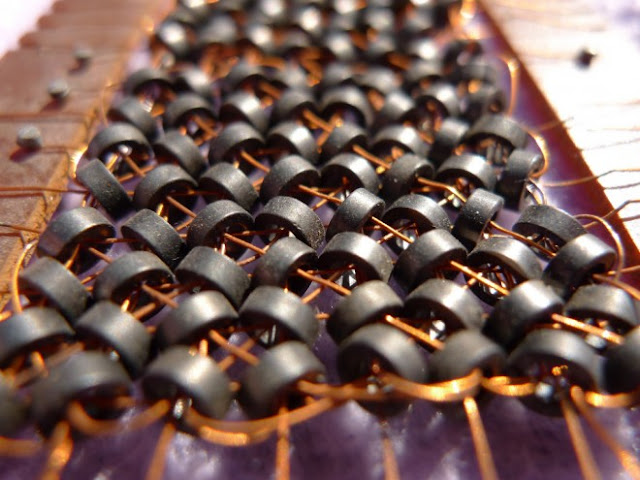 It is not easy to see the pattern if you are not familiar so a different view.

This diagram show enough to make the point I'm going toward. Notice the read/write lines. One in the X and one in the Y lines passing through each core and a sense line in each core. This is the heart of the system and the point I hope to make. Each core has a 1 and 0 magnetic field direction and the only time the sense line will produce output is when the core is in transistion. A core can be half selected and will produce no output but when fully selected it will produce an output. Note the arrows on the read and write lines pass through the core in the same direction. If both line receive a pulse the core will transistion and produce an output assuming the core is not already magnetised in that direction.  How does that work? 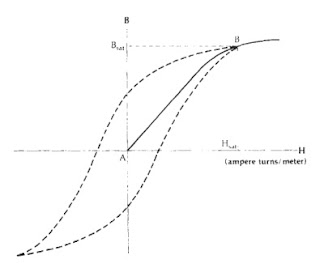 Core material response is plotted on a BH curve. The heart of the matter is here. A represents a new core that has never seen a magnetic field. When a current flows through the winding a field is produced as shown by point B. When power is removed the core holds the field. Magnetic domains are lined up in response to the current and when it is released they simply stay put. So when you reverse the current the field must first be cancelled and then built in the opposite direction. The portion of the curve from B to the vertical is when power is removed and the vertical to the horizonal is reverse current removing residual magnetism. Then it will build to the lower point and drop back to the vertical when power is removed. In order for the core to perform its function the current must be able to cause the field to switch. Something to remember the quickest way to ruin a core is to place it in contact with a permanent magnet. In the old days there would be a technician with a magnetic screw driver using it to poke around the cores....

Here is a better illustration. Point C and F represent the force to be overcome as we reverse the core field. 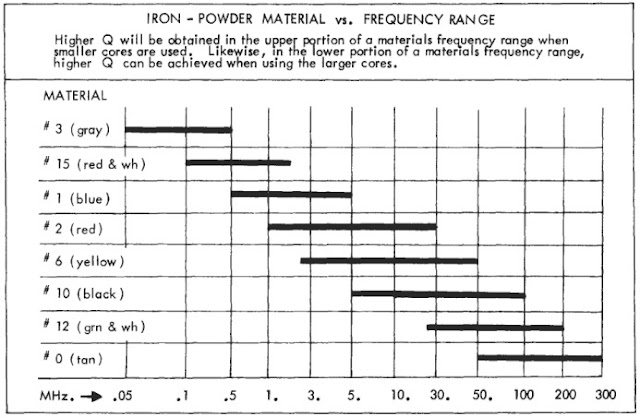 The manufacturer specs each material for specific frequency range. If you download the datasheets and compare the BH curves it could tell a story.

These curves tell us the "soft" core has a lower coercive force. Therefore it would respond quicker and to lower currents. So the soft core would be better suited to low power and higher frequency apps. The "hard" core would be better suited to power transformers operating at lower frequency. As we saw with the capacitor and inductor they "change" characteristics as they pass through resonance. The ferrite material requiring a certain amount of current and time to respond will reach a point as frequency increases that it becomes "invisible" and the inductor acts as though it is air core.
This is why core selection can make or break a project.
----- more to come -----